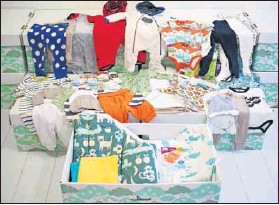 MATERNAL care packages will be making their way to Africa thanks to the generosity of the people of Bantry.

In August, an event called Mama Africa was held at Ma Murphy’s pub in Bantry to raise funds for the Toto Care Box charity, which is based in Nairobi, Kenya.

Fiona Moejes told The Southern Star: ‘It is still a young charity. We have only been up and running for about two years, but this year we have been busy.’

The money raised will be used to provide maternal care packages to impoverished women in slums in Kenya.

Fiona explained that they are working to address the high maternal and infant mortality rates by supplying necessary maternal care box to new mothers.

The box contains a mattress that acts as a crib for the new-born. It also includes items such as a mosquito net, surgical spirit, nappies and anti-dehydration kits.

In order to receive a free Toto Care Box, the expectant mother must attend at least four antenatal classes, which helps to incentivise antenatal checks.

Each box costs about 3,000ksh, which is about €25, and to date the organisation is supplying around 30 boxes a month at the moment.

In preparation for the Mama Africa event a group of people cooked for two days straight to give the people of West Cork ‘a little taste of Africa.’

Fiona said: ‘We also had some African jewellery, clothing and household items for sale, and held a raffle for prizes that were kindly donated by the people of Bantry.’

When Lucy Kaigutha read about a Finnish tradition that dates back to the 1930s, she was struck by a thought: Could the Scandinavians have a tool that would save the lives of newborn babies in Africa, in her native Kenya? Could a simple cardboard box doubling as a bed keep a baby safe in the first months?

“I remembered a student field trip to Marachi village in northern Kenya. There was a mum with a two-week-old baby who didn’t have much to take care of this child,” says Kaigutha, a graduate in public health and international development. “[It] really moved me. And I thought maybe I could also come up with a box, but one that will help mothers and babies in our poor areas.”

For that is what Finland’s welfare state has been doing for decades: giving every expectant mother a brightly coloured, sturdy cardboard box that is 74cm long, 43cm wide and 27cm high. It comes with a small mattress to turn it into a bed, and also sheets and clothes.

The box serves as an incentive to pregnant women to visit maternity clinics: only women who have a pregnancy certificate confirming that they had a health examination before the fifth month of their pregnancy receive a box.

Studies have shown that the earlier a pregnant woman visits a maternity clinic, the better the chances are that doctors will be able to save her baby, should something go wrong during her pregnancy.

As many women have more than one child, and therefore already have a box, they can also choose rather to receive a maternity allowance of about R2200. But, according to Finland’s health department, only about a third of mothers choose the money.

Government statistics for 2014 show that 99.6% of Finland’s pregnant women visited maternity clinics before the fifth month of their pregnancy.

The country also has one of the lowest infant mortality rates in the world — two deaths in 1000 live births of babies before their first birthday, data from the World Bank shows. This is a remarkable drop from the end of the 1930s, when nearly every 10th child born in Finland died under the age of one, according to Statistics Finland.

“It is a crib for the first three months, but the box also comes with 18 essential items that protect the baby in its first 28 days,” Kaigutha explans.

This includes a waterproof mattress, baby clothes, a blanket and a mosquito net. The container looks like any brown storage box, although it boasts the bright Toto Care logo.

But these boxes are sturdy and specially commissioned from young men from poor areas, Kaigutha explains.

The idea of baby boxes has spread across the world. Health professionals and local authorities have run pilot projects or adopted the boxes in efforts to cut infant deaths and to help poor parents. Businesses have caught on to the idea and are selling bumper designer versions to the well-heeled and trendy — the Baby Box Co offers a deluxe, if still cardboard, style stacked with products for $449.

In South Africa, a plastic baby box is being studied and trialled by the department of economics at Stellenbosch University and the health department is investigating a maternity package linked to baby boxes.

Japan, New Zealand, Mexico, India and Canada all have local variations of the maternity package and in the United Kingdom, where government statistics show there are four infant deaths in 1000 live births, health chiefs in several hospitals have started giving the boxes to new families.

The Scottish government has confirmed all babies born on August 15 or after will get a box with essentials as a “welcome gift” and to help tackle deprivation. The box acts as a Moses basket, according to information on the Scottish government website, and is a safe and comfortable place for babies to sleep.

But the Lullaby Trust, a British charity that provides sleeping advice and works to cut sudden infant death syndrome (Sids), has warned there is no evidence to suggest the use of the boxes will cut the risk of infant mortality caused by Sids.

“We support all efforts to promote safer sleep for babies,” explains Francine Bates, chief executive of the charity, in a statement. “However, we do have concerns about the baby boxes being marketed as products which will reduce infant mortality and Sids.”

The Lullaby Trust has also expressed concern about whether the boxes comply fully with safety standards, because there is no “specific standard for the use of a cardboard box as a sleeping place for an

Want to join the discussion?
Feel free to contribute!